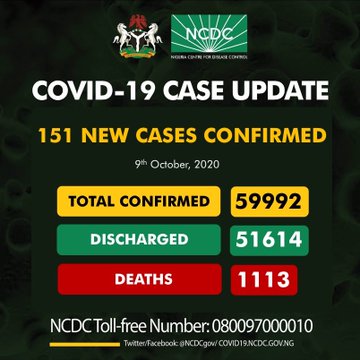 The Nigeria Centre for Disease Control (NCDC) has announced 151 new Coronavirus (COVID-19), infections in the country.

The NCDC announcing this on its official twitter handle on Friday said that the 151 new cases brought the nation’s confirmed COVID-19 infection to 59,992.

It stated that the cases were reported in nine states of the federation and the Federal Capital Territory, but with no death was recorded.

The NCDC said that Lagos state recorded the highest daily infection with 71 new cases followed by Ogun and Kaduna with 26 and 17 respectively.