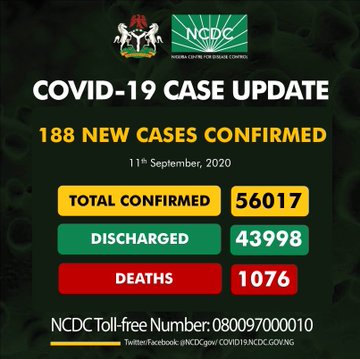 The Nigeria Centre for Disease Control (NCDC) has announced 188 new cases of the COVID-19 in the country with the total number of infections now 56,017.

The NCDC made this known on its official twitter handle on Friday, adding that one new fatality also raised the death toll to 1,076.

The NCDC said that Lagos state leads with 47 cases followed by Enugu, 25 and Plateau, 21.

Among others were Edo, Oyo and Kwara tied with 3 cases each as Yobe and Rivers State reports the least number of 2 each.