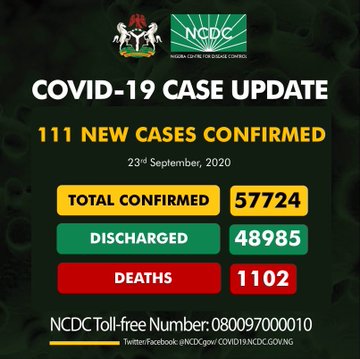 The Nigeria Centre for Disease Control (NCDC) on Wednesday confirmed 111 new cases of COVID-19 in the country.

The health agency, on its official twitter page, said the nation’s total number of confirmed cases is now 57, 724.

It disclosed that 149 persons were discharged after being successfully treated and had recovered from the coronavirus, adding that two died of the disease in the last 24-hours.

The new cases were reported from 12 states and the Federal Capital Territory (FCT).

The NCDC further stated that till date, 57,724 cases have been confirmed, with 48,985 cases discharged and 1,102 deaths recorded in Nigeria.