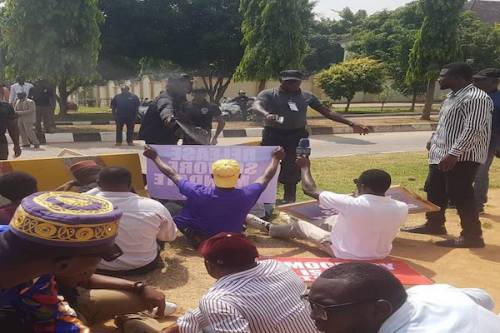 The National Conscience Party (NCP) has condemned the attacks on protesters and journalists seeking the lawful release of Comrade Omoyele Sowore.

The protesters, who were on a peaceful protest, were attacked by the Department of State Services (DSS).

The party, in a statement by its National Chairman, Dr Yunusa Tanko, said the attack is not only condemnable but a shameful act on the part of DSS.

Dr Tanko said the activists acted on a statement by the DSS that nobody has come forward to receive the Presidential candidate of the AAC, Comrade Sowore.

NCP in the statement calls on President Muhammadu Buhari to obey the court order as no one is above the law of the land and that the party condemns in totality the attitude of APC government in disobeying court orders.

NCP rejects every plan by this government to silence the media in Nigeria. Brutalizing journalists is illegal and condemnable, and the party urges President Buhari to urgently look into the ungodly act of brutalizing and arresting journalists in the country.

Sowore who has since last week met his bail conditions still remains in DSS custody is illegal.