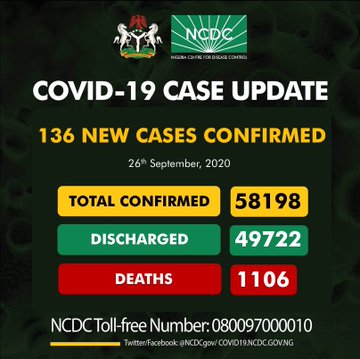 Nigeria’s COVID-19 cases has reached 58,198 with 49,722 patients discharged from various isolation centres across the federation, the Nigeria Centre for Disease Control (NCDC) revealed.

In its official twitter website, the health agency also announced 136 new cases of the infections with three deaths in the country for Saturday.

The agency said that the new infection were reported from 13 states with 116 patients discharged.

The NCDC said that the fatality figure of the country stood at 1,106 from the 36 states and the Federal Capital Territory.