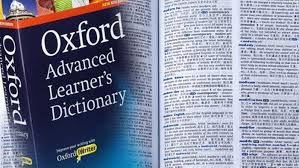 The principal historical dictionary of the English language, Oxford English Dictionary (OED) has recognised some frequently used Nigerian English as standard English words and included it in its recent update.

OED effects its updates on a quarterly basis and the recent, January 2020 constitute the Third Edition of the dictionary.

In a statement on its websites, OED said; “The material added to the dictionary includes revised versions of existing entries (which replace the older versions), and new words and senses both within the alphabetical sequence of revised entries and also across the whole A to Z range.”

To buttress the impact of Nigerian English in literature, the OED World English Editor, Danica Salazar, referenced a quote by Nigerian renown female author, Chimamanda Adichie, “My English-speaking is rooted in a Nigerian experience and not in a British or American or Australian one. I have taken ownership of English.”

“By taking ownership of English and using it as their own medium of expression, Nigerians have made, and are continuing to make, a unique and distinctive contribution to English as a global language,” Salazar commended. “We highlight their contributions in this month’s update of the Oxford English Dictionary, as a number of Nigerian English words make it into the dictionary for the first time,” she added.

Majority of the English words from according to Salazar; “are either borrowings from Nigerian languages or unique Nigerian coinages that have only begun to be used in English in the second half of the twentieth century, mostly in the 1970s and 1980s.

Related Topics:Oxford Dictionary
Up Next

Chinese supermarket where illegal products with expiry date of 2089, 2073 and 2037, shut down by FG in Abuja (Photos)