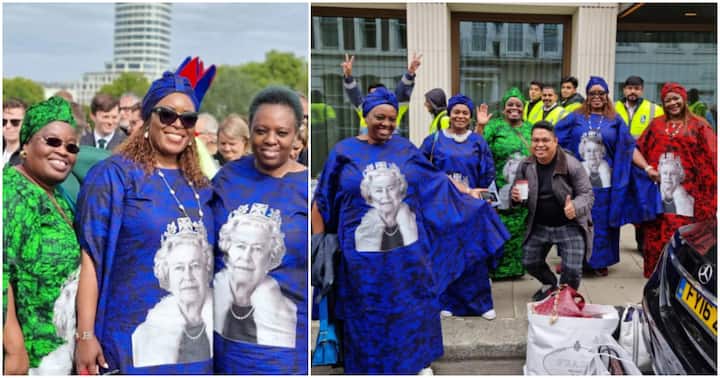 Some Nigerians in the UK have shown their love for Queen Elizabeth after she passed on by turning out in aso ebi to represent the country in London.

Aso ebi is known to be a big part of Nigerian parties, and these aunties made sure to represent the country in London. They all rocked matching asoebi in different colours with a photo of the late Queen Elizabeth printed boldly on it.

In the post’s caption, Momodu revealed that the fabrics were sent all the way from Lagos to London in time for the late queen’s burial.

The Nigerian aunties’ asoebi is also said to have gone viral thus making it to Sky News. It was also revealed that the palace requested it to be displayed at the London Museum.

The caption reads: “It started as a joke and one of us took it seriously. The outfits were turned around in four days and delivered from Lagos to London the day before the event.. “It went viral, was on sky news and the Palace have now requested for it to be displayed at the London Museum…”

Read reactions by some social media users about it below:

Naija !!! Oh my. These are some of the crazy things that make us special.”

Bookofkingz: “Y’all are going down in history.”

Brother_shaddz: “A great nation that always knows how to uniquely make its mark anywhere in the world.”

Ilamendi_ybnl5: “ we no dey carry last for this kind things.”

Omotioluwabi: “Even queen family sef no wear asoebi, naija too much.”