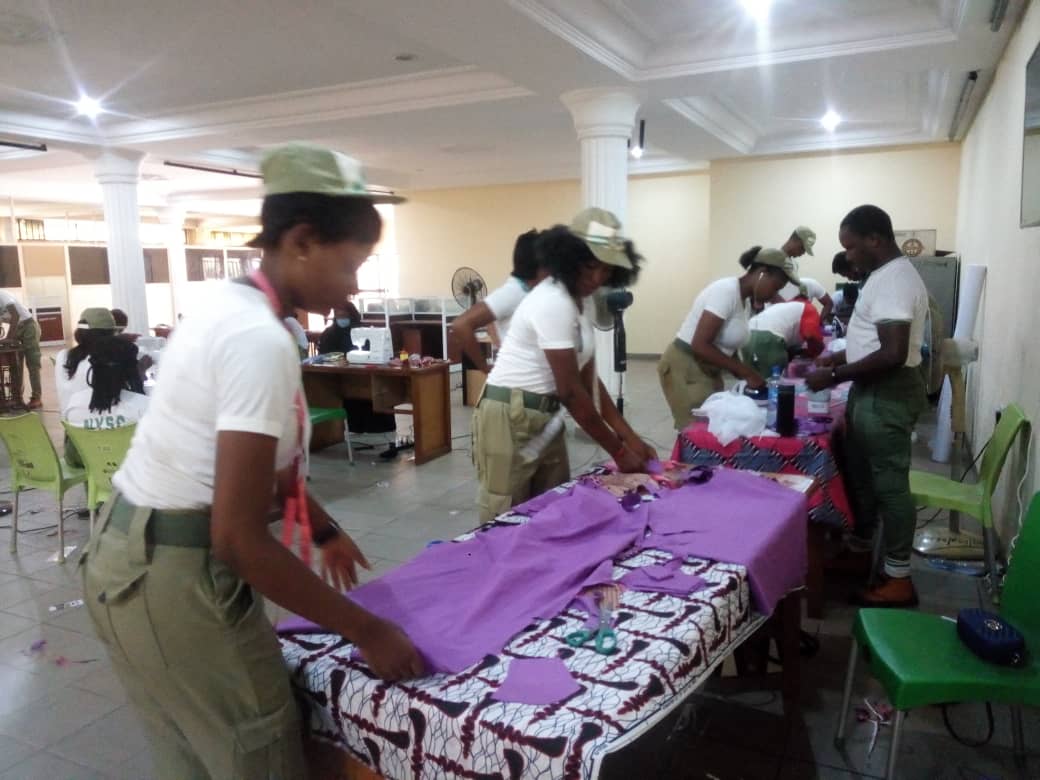 The National Youth Service Corps (NYSC) has reiterated the schemes total commitment to the federal government’s fight against the novel Coronavirus Pandemic.

The Director Brig. Gen. Shuaibu Ibrahim General made this declaration when he visited the FCT Face Masks production site at the Maitama District of the FCT.

The FCTA through the Minister of State, Dr. Ramatu Tijani Aliyu had, indicated FCTA preparedness to support FCT Corps Members to mass produce Face Masks for the Territory at the presentation ceremony of NYSC branded anti-Covid-19 Essentials such as Hand sanitizers, Face Masks, Soaps etc to the FCT Administration.

The Face Masks project which is at the instance of the Federal Capital Territory Administration, FCTA is already at the peak of production barely two weeks after its commencement and is committing financial resources for the production of ten (10) thousand Face Masks to ascertain their dispositions with corps members working assiduously by swinging immediately into action to prove their mettle as production level within one (1) week had reached an amazing proportion.

Gen. Ibrahim during the visit appreciated the hard work and special contributions, also applauding the ingenuity of the Corps members commitments and determinations toward making the scheme proud, he went on to stress that NYSC will not relax on its oars but remain one of the critical influencers of the Federal government fight against the spread of Covid-19.

The Director General, who lauded the striking qualities of the FCT Minister of State, Dr. Ramatu Aliyu for making bold the FCTA mass production of face masks challenge, also commended the supervisory role of the FCT Coordinator describing it as an undeniable boost to the Corps members production capacity.

Hajiya Walida Isa expressed delights for the Director General all important visit to the production site, saying  that the visit will definitely impact positively on the production prowess of the Corps members and went on to assure that the Corps members will deliver within time bounds, and in compliance with Standard Organization of Nigeria SON, approved prescriptions.