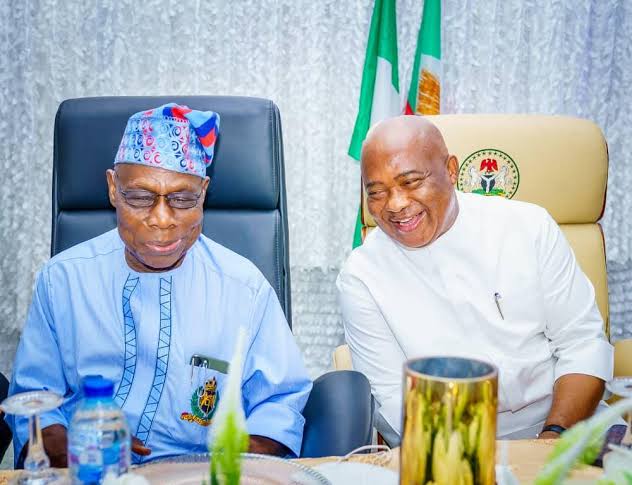 Former President, Chief Olusegun Obasanjo, on Wednesday, charged the Imo State Government to ensure increased participation of youth in all facets of the economy as a means of curbing insecurity.

Obasanjo made the call in Owerri during a dinner organised by Governor Hope Uzodimma of Imo to mark the former president’s 85th birthday.

This was according to a statement signed by the governor’s Chief Press Secretary, Mr Oguwike Nwachuku, and made available to newsmen on Wednesday.

The former President urged the governor not to ignore the youths regardless of how their behavior may seem.

He admonished the governor to find a lasting solution to the spate of insecurity in the state by engaging those he called the ‘bad boys,’ regardless of who they are.

“Hope is your name, it means a lot because life without hope is meaningless.

“There are three categories of bad boys: those genuinely frustrated and angry, those who are being sponsored by politicians for political vendetta, and those who by nature are criminally minded.

Read also: I will quit politics than spill blood – Uzodinma

“We have to find a solution if insecurity remains a problem in our society. And for the genuinely frustrated and militants, we have to learn to deal with them by talking to them,” Obasanjo said.

In his statement, Uzodimma described Obasanjo as “a great pan-Nigerian leader” due to his passion for the betterment of the country.

“God has already granted you long life. We owe him our prayers always.

”The Government and people of Imo State are happy you are in our state and our loyalty to you is undiluted because you have paid your dues,” the governor said.

In January 2022, Uzodinma failed to name the sponsors of attacks in Imo contrary to a pledge he made.

He, however, said he would no longer name names but would leave security agencies ‘to do their work’ and prosecute those found culpable.

Uzodinma claimed many of the persons carrying out attacks in the state had been arrested.