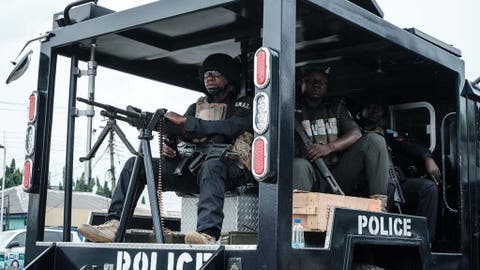 A suspected armed robber has been shot dead by the police in Ogun State.

DAILY POST learnt that the deceased was shot dead in the early hours of Friday during a gun duel with the police along Sagamu/Ijebu-Ode highway.

It was gathered that the gun duel ensued when the slain suspected and his colleagues were “robbing people on the highway.”

“The suspect met his Waterloo when the DPO of Odogbolu division, SP Awoniyi Adekunle, and his men, who were on joint patrol with a team of military men, received a distress call that armed robbers numbering about seven have blocked the road around Southwestern University, and are dispossessing people of their belongings,” Ogun Police Public Relations Officer, Abimbola Oyeyemi, told DAILY POST on Saturday.

Upon the distress call, Oyeyemi said the DPO and his team had moved to the scene.

Sighting the police team, the gang reportedly engaged them in a gun duel that lasted for about 45 minutes.

It was said that one suspect was arrested with severe bullet injuries, as others escaped with varying degrees of gunshot wounds.

“The arrested suspect gave up the ghost on his way to the hospital,” it was disclosed.

Meanwhile, the State Commissioner of Police, Edward Ajogun, directed that other members of the gang be hunted for, while appealing to hospitals to alert the police, if anybody with gunshot injury is seen.

NSCDC Board Shortlists 6,500 Out Of 1.4m Applicants For Recruitment