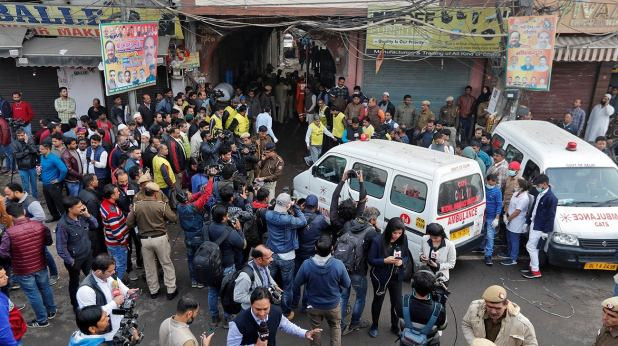 A large fire has swept through a bag factory in the Indian capital Delhi, killing 43 workers, officials say.

The blaze broke out at the four-storey building in the city’s congested old quarter early on Sunday morning.

At least 100 people were sleeping inside the factory, which mainly makes school bags, when the fire started. More than 60 have been rescued.

Delhi’s firefighters received the first call about the fire at 05:22 local time on Sunday (23:52 GMT Saturday).

The fire began on the lower storeys, spreading rapidly to the third floor where workers were sleeping.

The area where the factory is located – Azad Market – is a web of narrow alleyways, which made it difficult to reach the blaze.

Rescuers had to carry out victims on their shoulders one-by-one with firefighters cutting away window grills to access the building.

A local fire chief Dilnawaz Pasha, said the building did not have a proper fire licence and was operating illegally as a factory.

It is not clear what caused the blaze but an investigation has been ordered.

Indian politicians have been expressing their horror at the blaze.

Related Topics:DelhiFactory FireIndia
Up Next