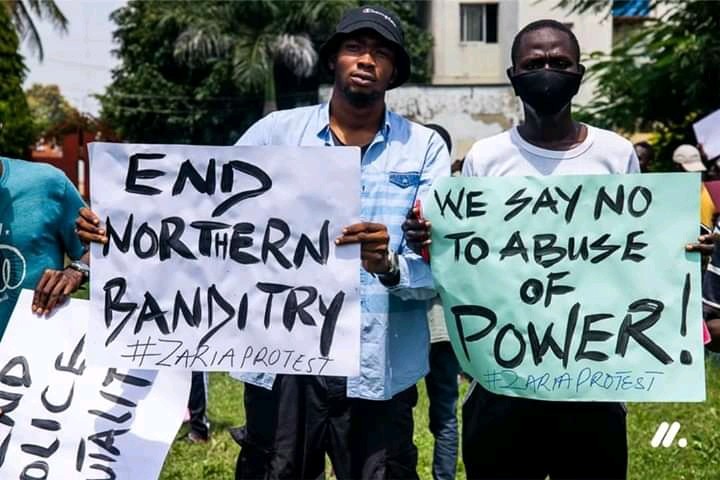 The Coalition of Northern Groups (CNG) on Thursday took to the streets in Kaduna, Bauchi, Niger and Kano States to protest the escalating security challenges facing the North.

In Kaduna, the protesters who marched peacefully from Waff Road to the Kaduna State House of Assembly Complex demanded an “immediate end to banditry, terrorism, and Kidnappings in Northern Nigeria.”

They carried placards and banners with various inscriptions such as: “Stop the killings in the North,” “Empower SWAT to end insecurity,” “End Boko Haram now,” End Banditry Now,” “The North is Bleeding,” and “Stop Rape Now.”

The protesters were received by the Chief Whip of the Assembly, Hon. Shehu Yunusa.

Addressing the Chief Whip, the coordinator of the protest, Mr. Sa’ad Bako, said the CNG was compelled to protest the unending insecurity in the North.

The group lamented the recent violent attacks on innocent people in Kaduna, Katsina, Zamfara, Sokoto, Borno, Adamawa and other northern communities and other disturbances across the North.

“The rise in the spate of banditry, kidnappings, cattle rustling and bloodshed in the North has become a major trying point for everyone but the authorities – who have remained detached from the reality,” Bako said.

The group demanded: “An immediate and comprehensive improvement of security in the nation, most especially all over Northern Nigeria.

“The promulgation of legislation to compel the review of the salary and general incentive packages of all men of the security services.”

The protesting youths carried various inscriptions on the placards written “Arewa is Bleeding,” “Stop the Killings in the North,” “Empower SWAT to Stop Killings, Kidnappings, Rape,” and so on.

In the press statement signed by the CNG’s spokesman, Mr. Abdul-Azeez Suleiman, the group said the protest, which would spread across the North-western region of the country is to show concern over deteriorating national security and other pressing issues.

Youths in Bauchi and Niger States under the aegis of CNG also staged a protest same day to demand an end to insecurity, poor road infrastructure, and the epileptic power supply in the North.

The protesters visited the government house and the state police command in the two states to deliver their messages to the government.

They also backed the creation of Special Weapons And Tactics (SWAT) team, saying it is in a better position to tackle various forms of security threats such as killings, banditry, kidnapping, rape, and Boko Haram terror attacks in the region if they are fully equipped and trained.

In Niger State, the protesters decried the poor condition of road infrastructures in the state, which they describe as death traps.

They urged the federal government to fix all its roads and address poor power supply in the entire Northern states.