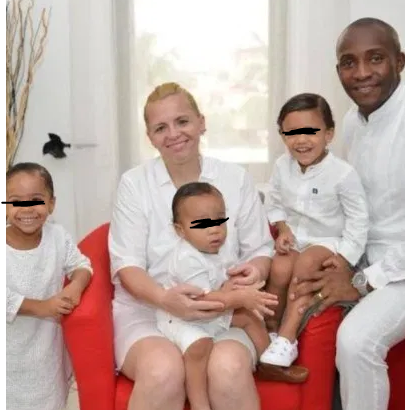 Information from the police states that Mr Tohouo, a native of Cameroon and his wife a Bulgarian reside at the Cul De Sac Compound, the same as former Head of State Ernest Shonekan which is off Oba Adeyinka Oyekan in Ikoyi, a highbrow area in the state.

According to the police, the estate electrician had gone to the couple’s home under the guise of coming to fix an electrical fault. He came in with one of his friend.

When they gained entrance, the eletrician and his friend overpowered the couple and locked them in separate rooms. Mrs Tohouo was said to have been forced to transfer some money to her attackers after which she was forced to drink acid, stabbed and suffocated with a pillow. The assailants then moved to Mr Tohouo who they forced to drink acid and also stabbed.  He was however able to send a distress call to his company’s Chief Security Officer (CSO) who in turn contacted the Lagos state Commissioner of Police, Hakeem Odumosu.

Bala Elkana, the state police command’s spokesperson, said those who carried out the attack are currently in police custody.

“We have an incident on someone who was attacked with his wife. Both of them were stabbed. The wife died and he is still alive and responding to treatment. Those who carried it out are in our custody. One of them is an electrician in the estate, who was assisted by his friend. Their aim was to steal from the man. They were there to rob” he said

Related Topics:Maersk Maritime Company
Up Next