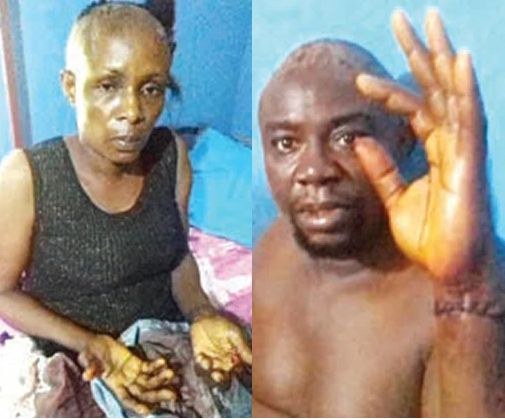 A landlord, identified simply as Alabo, is on the run after allegedly hacking his tenant and her fiance.

The landlord who owns a house at Ekwulobia Street Mile 3, Diobu in Port Harcourt City Local Council of Rivers State, on Sunday, May 15, allegedly attacked a lady named Comfort and her fiance, Stanley Nwagadi, with a machete out of perceived jealousy.

The landlord has been accused of making amorous advances at Comfort and shaming her for keeping a “jobless” man who she feeds in her home.

Speaking from her hospital bed, Comfort said a quarrel ensued on Sunday morning when she washed and spread her clothes on the line, and Alabo, who also resides in the compound removed her clothes and threw them on the ground.

She claimed that when she went to pick up the clothes, the landlord, in his ‘usual manner,’ started to verbally abuse her, saying, “instead of man to keep you at home, you are throwing yourself at a man.”

According to Comfort, her fiance heard the utterance of the landlord and there was an exchange of words between them.

The quarrel, she said, was quelled by co-tenants and she left the compound with her fiancée.

When they returned to the compound, they said they had no idea Alabo had sharpened a machete and was lying in wait for them.

Comfort said the moment she walked inside the compound with her fiance, the landlord rushed her with a machete and inflicted several machete cuts on her.

She added that Stanley, who ran to save her on hearing her screams, was also cut on his head and hand before the suspect ran away.

Her husband, Stanley Nwagadi, called for the arrest and prosecution of the landlord.

The Rivers State Police Command confirmed that the landlord is on the run but they assured that he will be arrested and made to face justice.

Related Topics:#SosscopeLandlordRivers State
Up Next