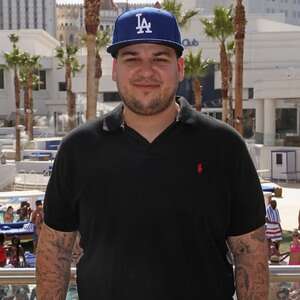 Rob Kardashian has made a confident return to the limelight and debuted his slimmed down figure in a rare snap of himself shared on his Instagram.

The 32 year old Kardashian brother smiled in the photo as he posed next to his mum Kris Jenner dressed as Papa Troll for Halloween.

The dad of one later posted a sweet snap of his two year old daughter Dream Kardashian, who he shares with ex Blac Chyna, 31.

Rob then wrote in the caption: “Poppy Troll dressed up with Papa Troll for #Halloween #Dream”.

The Kardashian was later seen at another family bash, this time with his half sisters Kylie and Kendall Jenner.

Kylie shared a snap of the three of them on looking happy as they all sat together during model Kendall’s 24th birthday bash which saw guests wear fancy dress once again.

Rob’s transformation comes after his public split from Dream’s mum Blac Chyna in 2017.

Cardi B to storm Nigeria in December – Darey (See proof)