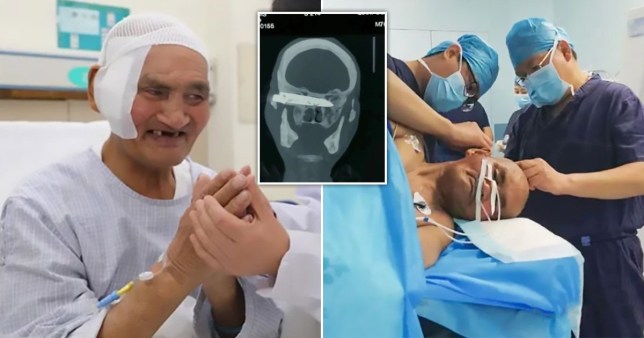 A surgeon has removed a rusty knife from a man’s head which was embedded there for 26 years.

The four-inch blade had been there since he was violently mugged in 1994.

In 2012, the patient, 76, named Mr Duorijie sought medical attention after he began suffering from a chronic headache, but the knife was kept in his head because it was believed to pose a threat to his life if he had it removed.

It was finally taken out at Shandong Qianfoshan Hospital in China, which described the case as a ‘miracle’.

Mr Duorijie, who is from the rural county of Haiyan in China’s north-western Qinghai Province, underwent two procedures on April 2 and 8.

Doctor Zhang said: ‘During the two-hour surgery, surgeons removed the rusty 10-centimetre blade. ‘On April 8, he underwent a second operation to clean his wound. ‘He’s recovering well and can already walk around on his own. His head pains are gone, and he has regained full sight in his right eye.’ Mr Duorijie said: ‘I couldn’t laugh, yawn or even cough. ‘The doctors have given me a second chance at life and ended my nightmare of more than 20 years.’

Coronavirus case across Africa nears 20,000 with over 1,000 death (See breakdown by country)