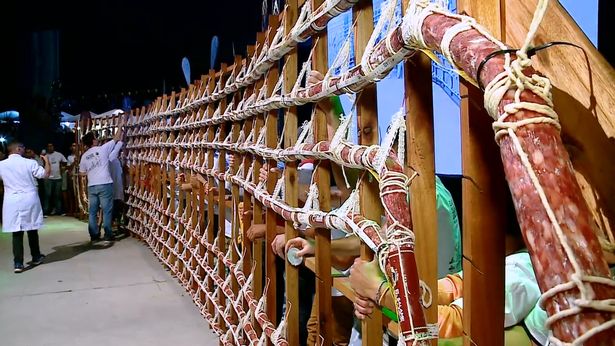 A small town in Argentina has broken the record for world’s longest salami sausage – and it is so large it outranks the Statue of Liberty.

The Argentinian town of Tandil broke the world record for the longest salami with their 99.5 metre meat product, dwarfing the 93 metre tall neoclassical tourist trap located in New York Harbour.

The world record-breaking salami, which weighs 278 kilos in all, was presented to hundreds of hungry onlookers.

Those that were present at the unveiling of the gargantuan cured meat were even allowed a chance to taste it during the 37th edition of the Sierra culinary festival.

The gigantic sausage took “36 days and more than 100 people” to be completed according to organiser Mariano Frias stated.

This isn’t the first time that the organisers have outdone themselves on competitive meat packing.

The Council of Denomination of Origin Salame de Tandil, the organisers of the event, broke their own record where they presented a salami back in 2019.

This inferior sausage only came to measure 87.56 metres long and weighed a measly 262 kilograms in weight.

Tinubu breaks silence, says Amotekun is not a threat to Nigeria