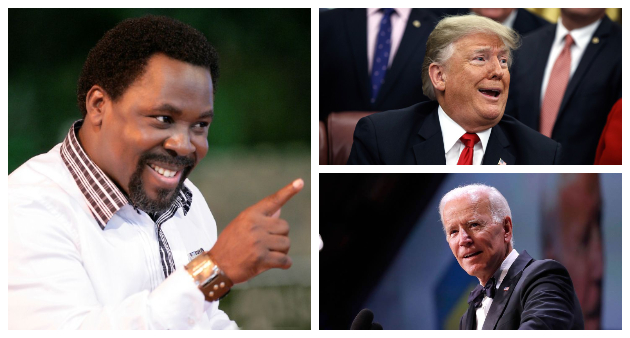 The historic emergence of Joe Biden as the 46th American President and the circumstances surrounding his closely contested election with Donald Trump were ‘prophesied’ by prominent Nigerian Prophet TB Joshua.

On December 28th 2019, Joshua included a message regarding the American election in his prophecy for 2020 which he termed ‘The Year Of Humility’.

“Approach to the security issue will affect the candidates and swing voters in the next election,” the cleric declared. “It will be tough in the election. They should pray against a recount. It may be too tight.”

Subsequently, on November 1st 2020 – two days before the election – Joshua spoke with further clarity regarding the election, plainly stating that he saw “a new President”.

“We Christians would have loved it to go the way we wanted,” he admitted, referencing the huge support for Trump among evangelical Christians.

“But the Bible says it is never proper to base our faith on our improvement after prayer. We should not worry. The joy is that the new Supreme Court Judge, Amy Coney Barrett, will be an instrument of check,” he continued.

“There is likely going to be pockets of resistance here and there but nothing will change. Let me reserve what I am seeing until the inauguration of the new president,” Joshua concluded.

The “pockets of resistance” evidently refer to Trump’s stubborn insistence that the results were fraudulent and his refusal to accept Biden’s mandate.

Trump’s legal team have already indicated they will insist on a recount in several battleground states, equally confirming Joshua’s prediction of a recount after a tight election in his 2020 prophecy ten months ago.

“What is happening in the American election is as a result of the power in the tongue,” Joshua also stated in the prophecy, quoting where the Bible says in Proverbs 18:21 that the “tongue can either work for us or against us – death and life lie in the tongue”.

In confirmation, most analysts agreed Trumps divisive and often erratic rhetoric contributed significantly to his loss in the polls.

Intriguingly, almost all major ‘prophetic voices’ in America and around the world unanimously predicted Trump’s re-election.

The video of Joshua’s prophecy regarding Biden’s historic electoral victory has been viewed over one million times on YouTube and Facebook since it was uploaded on 2nd November 2020.