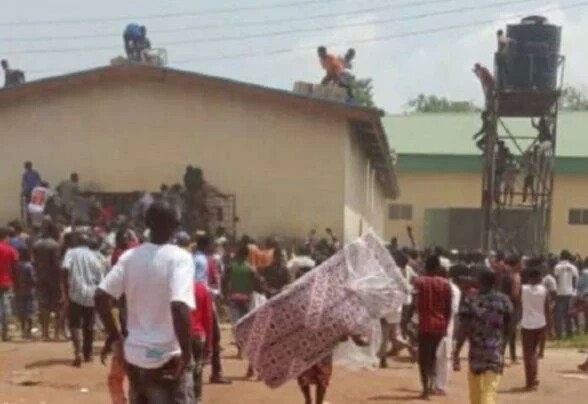 Soldiers and policemen made efforts on Tuesday to chase away hoodlums who invaded the National Youth Service Corps (NYSC) Orientation Camp in Kubwa (FCT), Abuja, carting away mattresses, utensils, electronics and other items.

The Nigerian Air Force (NAF) and the air wing of the Nigeria Police also embarked on aerial patrol with helicopters to scare the invaders.

Scores of hoodlums looted shops and also stole foodstuffs, mattresses, electronics and other items at the NYSC Orientation Camp in Kubwa.

Some of the looted items belonged to individuals quartered at the NYSC camp as no corps member was in the camp.

It was also gathered that the miscreants stole textile materials, generating sets and computers from the shops opposite the NYSC camp.

The early raid prompted the police and the Nigeria Air Force to send helicopters to keep surveillance over the area, while a detachment of soldiers and policemen were sent to the scene to control the crowd.

The hoodlums, who were armed with machetes, jack-knives and clubs, also attacked residents of the area.

They blocked the road at about 9 am, turning back motorists while the Kubwa village market was immediately shut by its authorities to avoid any invasion.