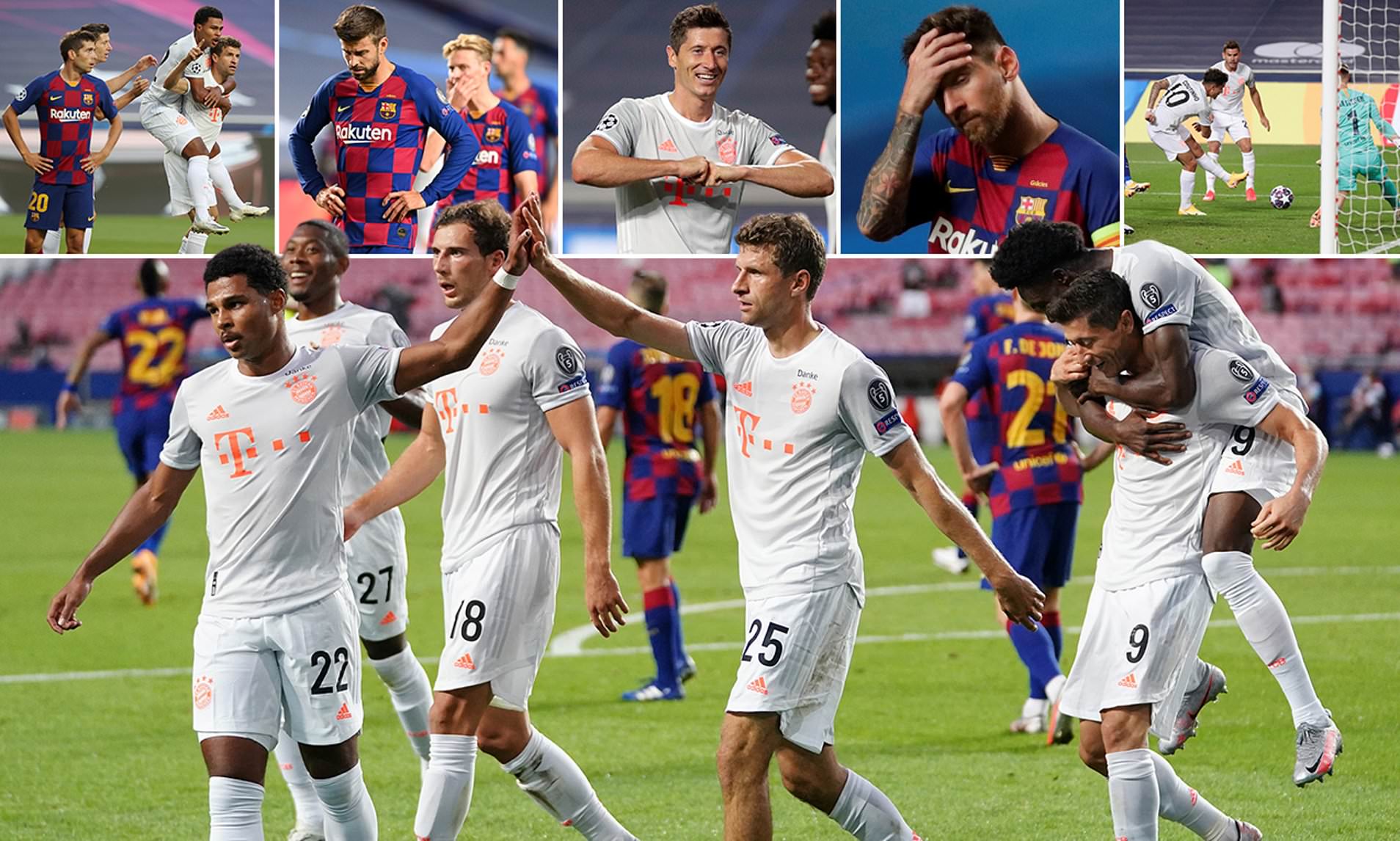 Most football matches become a blur once the final whistle goes. You might remember some special goals, maybe the result itself, years down the line but not too much else. But every now and then, a football match comes along that sears itself into your brain, moment by moment, making it an entirely unforgettable 90 minutes.

Or desperately forgettable, if your team was on the wrong side.

Bayern Munich humiliated Barcelona 8-2 in Friday’s Champions League quarter-final in Lisbon to set up a potential clash against Manchester City for a place in the final.

Thomas Mueller and Philippe Coutinho both scored twice as the German double winners blew Barca away in a merciless display that will prompt serious questions over Lionel Messi’s future in Spain.

Ivan Perisic, Serge Gnabry, Joshua Kimmich and Robert Lewandowski were also on target for Bayern, with Barca’s goals coming via a David Alaba own goal and a second-half strike from Luis Suarez.

Thomas Mueller scored twice either side of goals from Ivan Perisic and Serge Gnabry in a stunning opening 31 minutes at an empty Estadio da Luz, with a David Alaba own-goal having briefly brought Barcelona back level.

Luis Suarez pulled it back to 4-2 at one point in the second half, but Barcelona then caved in, with Joshua Kimmich getting Bayern’s fifth before three more goals in the final stages, one for the prolific Robert Lewandowski and two for substitute Philippe Coutinho.

That was the really humiliating part for the beaten side, with Coutinho on loan in Bavaria from Barcelona, who spent 160 million euros on signing the Brazilian in 2018 but never got the best out of him.

Here’s a look at the best reactions to the game from a crazy night:

Goals in the UCL this season:

Barcelona paid £142,000,000 for a player to come on and score two and set up another against them in the Champions League quarter final.

Barcelona 7/2 – time to consolidate and build a partnership 🤭

For the first time since 2004/05, the #UCL semifinals will not feature Cristiano Ronaldo or Lionel Messi ❌❌pic.twitter.com/wC1XPDViP4

Lionel Messi doesn’t deserve 8-2. I feel angry on behalf of him writing this. Get it fixed, Barcelona.

😱 Bayern score 8 in a match for the first time…

🤯 Fastest a team has ever scored 4 goals in a knockout match.#UCL

I know Bayern have a great set of players and all but they weren’t this good under Niko Kovač. Hansi Flick deserves huge credit.

Worth every penny for Barcelona… oh wait. 🙃pic.twitter.com/VJtVdzVUVy

And they made Barcelona look like a 2. Bundesliga teampic.twitter.com/26jT2J5Cyu

Coutinho when Barcelona loaned him to Bayern Munichpic.twitter.com/ijInm0246K

Time for a great team to take some tough decisions and rebuild. #Barcelona

Arsene Wenger really wanted to mould Arsenal into Barcelona so bad, he allowed his team to lose 8-2 to Manchester United so that 9 years later, his Arsenal would finally be compared to Barcelona.

This is Barcelona with Messi. Wait till Messi retires.

Congratulations Bayern,superb performance par excellence….Remember Barca of yesteryear,because now?
“Gone is the romance that was so divine.
’tis broken and cannot be mended. “ #BarcaBayern

The tweet that seemed to be most common, however, was this:

Remember when Caesar was stabbed by his best friend Brutus and he said, “Et tu, Brute?”, which means,”Even you, Brutus?”

Related Topics:BarcelonaBayern Munich
Up Next