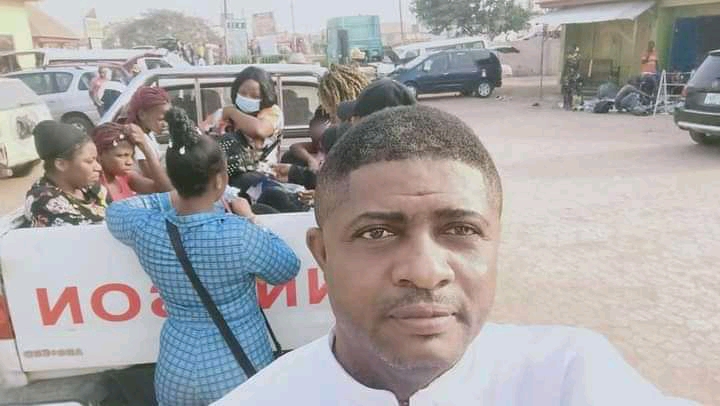 A reverend father identified as Mfa Mdooyongo saved some young girls from being trafficked to Mali through Lagos.

Narrating the story, the Benue clergyman stated that he was alerted that something of that nature was going on.

He said he quickly made some calls to some Benue activists and security operatives which enabled them to track and catch the traffickers.

Taking to his Facebook page to share photos of the incident, Mdooyongo said operatives of The National Agency for the Prohibition of Trafficking in Persons, NAPTIP, came but a little bit late.

“The eagle eyes of Krayzietee Atu suspected trafficking at Duku Park and called me. I rushed this time, but not slowly. Called one by one and did interrogation like DANIEL and got conflicting information. I called the police and Ukan P Kurugh and that is how we changed their destination Makurdi to Makurdi police station. NAPTIP also came and followed us to the police station.

At the station some started begging and confessing to me the promises made to them and the money they girl showed them. Yes, they girl HAS GOOD MONEY ON HER!
The lady with the tickets is the MERCHANT! I think they are a gang! I feel this merchant is ONLY unlucky. Young girls are disappearing in IDP camps without trace and this points to something.

Just made my statement and left the police station. I felt it when the smallest remorsefully said, “Fada, wase se” (fada help us) when I was leaving the station.
Let us be our sisters keepers!”