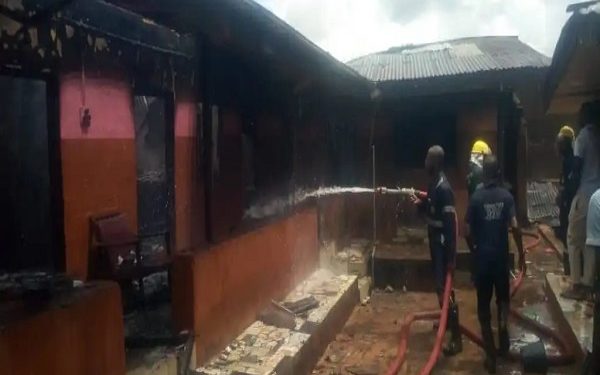 The kids, who were fast asleep when the incident occurred, were rescued by a 17-year old girl, Chinenye Igwedimma, said to be a cousin to the family.

The building located at No. 1 Ezingwu Street belonging to the family of staff of the Anambra Broadcasting Service, Awka, Blessing Uchendu, reportedly went up in flames while the occupants were away.

The property worth millions of naira, including academic certificates, were completely razed by the fire which engulfed the entire building.

Residents and sympathisers said the fire was caused by electrical malfunction as it started shortly after electricity was restored.

Narrating her ordeal, the rescuer, Igwedimma, said she had returned to the house to perform some chores when she met the roof of the building in flames.

She said: “My first action was to pull out three kids who were sleeping in the already burning house.

On her part, Blessing Uchendu, said she was at the ABS Corporate Headquarters when she got a call that the house was on flames.

The eldest daughter of the family, Uchenna Mmuo, said she was busy at her shop when she was alerted.

She appealed to government and spirited individuals to assist the family.

Deputy President General, Umuokpu Town Union, Chika Nwuzor and Principal Fire Superintendent of the State Fire Service, Emmanuel Nze, said it was difficult to trace the cause of the fire as no adult was at home when it began.