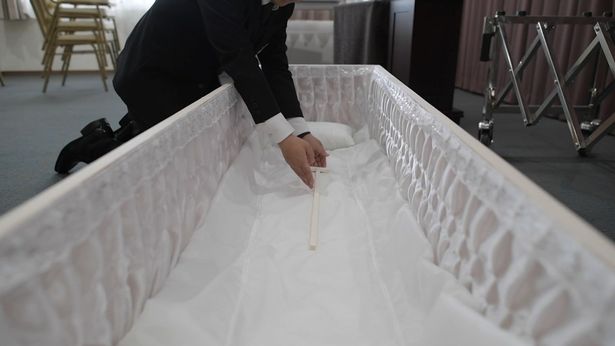 A Japanese company has come up with an ingenious way to keep funeral costs down – a build-your-own funeral kit.

The thrifty kit, eerily reminiscent of an Airfix model, contains everything you need to go six feet under with ease, and costs roughly £256 (shipping costs not included).

Though the kit does have some additional costs, such as ground rental and burial costs, the idea could in theory save grieving relatives thousands.

Though you may have to have a living person handy to assemble your coffin, and the company are quite clear that you should NOT attempt at home burials or cremations (even if you do love a bargain).

You also need to have a mortician handy for the embalming, and someone with experience in cosmetic preparation, as being handy with a Naked Palette doesn’t exactly qualify you for that.

– 1 silver box (for storing bones left over from cremation)

– Duvet set for the coffin (which includes a head pillow, mattress and comforter duvet)

Shinohara Norifumi, the CEO of Tsubasa Public Utility Co, who manufacture the kits said: “This manual contains information on how to carry the body, how to lay it down, and when actually cremating, how to make an appointment, how to pay, how to do it at the crematory, those things are explained.”

There is even the option for an open casket ceremony as the coffin comes with a viewing hatch of sorts, adorned with two small decorative tassles.

The Coffin has a viewing hatch, decorative tassel and  is suitable for a traditional burial and also comes with an optional urn if the deceased has opted for cremation.

The DIY handbook also contains instructions on ceremonial rites, that can help put the soul of the departed to rest.