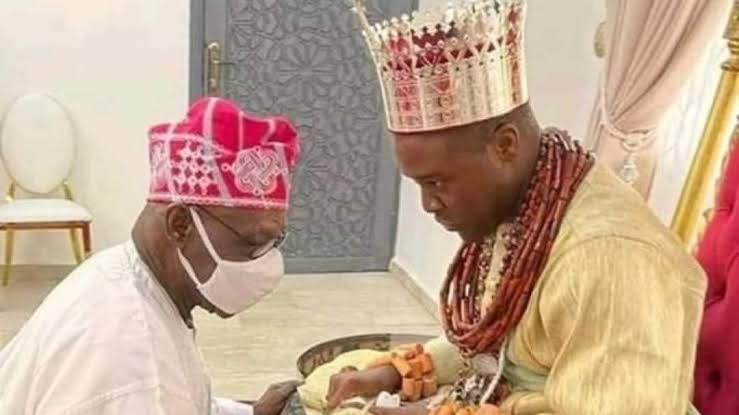 The former president, who paid homage to the monarch during the Coronation Thanksgiving Service of the Olu, held at the Warri Palace chapel, went straight on his kneels as a sign of respect to traditional institution.

He urged Atuwatse 111, to unite the entire Itsekiri nation and begin the process of healing the kingdom.

Atuwatse III was crowned as the 21st Olu of Warri on Saturday at Ode-Itsekiri, ancestral home of the Itsekiri in Warri South Local Government Area of Delta.

Obasanjo prayed for a peaceful and long reign of the Olu and advised him to always stay very close to God in all his dealings.

He urged the king to diligently perform the task God had entrusted to him, noting that the position was given to him by God.

The former president, while acknowledging that the title “His Majesty” carried a lot of responsibilities, urged the Olu not shun the experience and advice of elders.

“Two things must guide you: one, do not shun the experience and advice of elders, it is useful. Experience is wisdom, make use of the experience of people around you. Secondly, be very close to God.

“I do not want to see the fourth Olu, I have witnessed three being crowned in my lifetime.

“I am one of the happiest people for your installation. God has specially favoured me to see one, two, three Olu of Warri and I do not want to see four,” Obasanjo prayed.

Obasanjo promised not to be far from the king, saying “and if there is any reason to summon me, use your majestic power to do so,” he said.