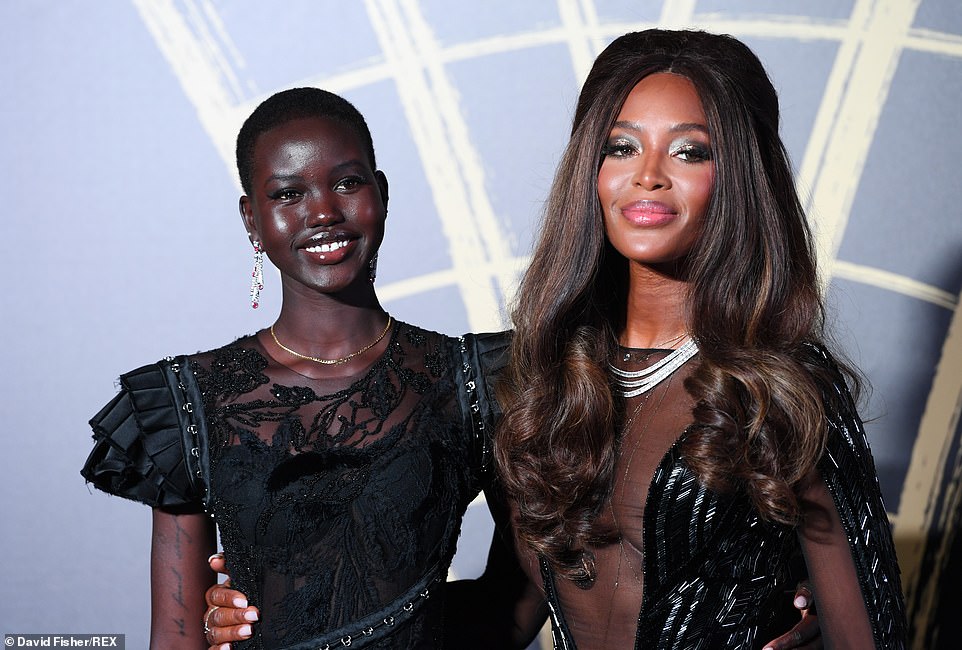 Naomi Campbell, 49, is an iconic supermodel known for her daring and edgy looks on the red carpet.

And Naomi Campbell put on an eye-popping display when she stormed the catwalk for her charity Fashion For Relief’s party at London Fashion Week on Saturday.

The Vogue coverstar, 49, sported two very quirky ensembles, the first of which showed off her ample cleavage as she modelled a bizarre red cut-out cape and matching headdress.

Naomi’s striking ensemble was complete with loose-fitting trousers which had suspenders and a bow-detailing at the front to give the look a chic flair.

Meanwhile, the fashion superstar’s second ensemble saw her slip into a dazzling gown that fit snugly on her slender frame and was adorned with reflective sequins.

Adding to the look, Naomi’s outfit had colourful feathered sleeves that complemented the dress itself, while she stepped out in tasselled black heels.

Naomi opted for a look that was the complete opposite of her red carpet entrance ensemble, as her brunette locks were brushed into a sleek, straight style.

Earlier on, she led the celebrity arrivals on the red carpet of the event alongside Maya Jama, where she showed off her toned frame and perky cleavage in an eye-popping sequinned leotard which slashed to her taut midriff as she posed up a storm.

The garment cinched in at her toned waist and rose high on her endless legs, with the star oozing confidence on the red carpet.

A semi-sheer skirt only narrowly preserved the beauty’s modesty, and the star accessorised with a selection of pearl necklaces, shimmering body chains and stiletto heels.