If You Are Successful And Wealthy, Avoid Your School Alumni WhatsApp Forum - Reno Omokri

China Fires Up Its 'Artificial Sun' For The First Time (Photos) 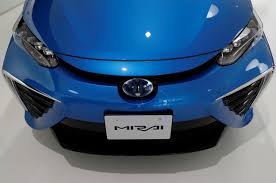 Toyota introduced the hydrogen-powered Mirai saloon in 2014. Now it is getting ready to take its advanced zero emission fuel cell electric vehicle (FCEV) technology to new heights with the second generation model.

The Mirai has a driving range of around 300 miles, easy refuelling in a matter of minutes and no emissions other than pure water. Since launch, around 10,000 Mirai have been sold; at the same time, Toyota has actively supported the development of hydrogen fuel infrastructure in key markets.

At the 2019 Tokyo Motor Show, Toyota provided an early glimpse of the advances it is making with the new Mirai. Scheduled for launch in 2020, initially in Japan, North America and Europe, Toyota says the new Mirai will be much more than an eco-car, showing how its FCEV technology is no barrier to creating a vehicle that is rewarding to drive and beautiful to look at.

Toyota is targeting a 30 per cent increase in Mirai’s driving range through improvements to the fuel cell system and the use of larger on-board hydrogen tanks. There are now three tanks – one long, two short – which together increase the fuel capacity by around one kilo of hydrogen compared to the current model.

The new Mirai’s Chief Engineer, Yoshikazu Tanaka, said: “We have pursued the goal of making a car that customers will feel they want to drive all time, a car that has an emotional and attractive design and the kind of dynamic and responsive performance that can bring a smile to the driver’s face.

The new Mirai is being constructed on Toyota’s latest rear wheel drive modular platform, which was engineered to accommodate different powertrains – including a hydrogen fuel cell – at the outset. Toyota says it gives the new Mirai a higher degree of body rigidity, which contributes to greater agility and responsiveness, and a lower centre of gravity, which makes for nimble, rewarding handling.

As well as extending the potential driving range, improvements in the performance of the fuel cell system are claimed to give the rear-wheel drive Mirai “linear, smooth response when pulling away and an elegant driving feel, with unity between the driver’s throttle inputs and the car’s acceleration”.