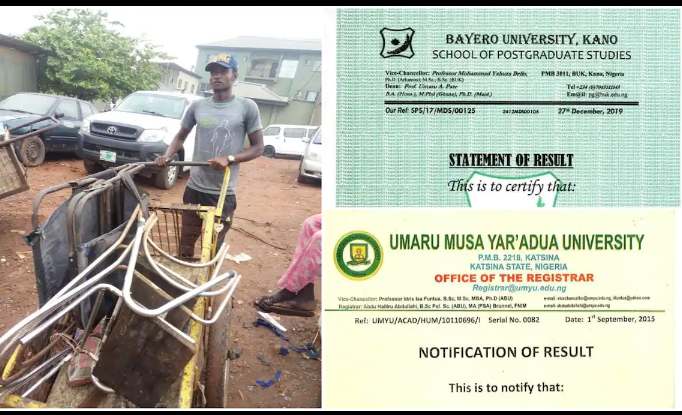 Surajo had his primary education at Karofi Model Primary School from 1996 to 2002. From there, he moved to GSSS, Karofi, from 2002 to 2008, Daily Trust stated in an interview published on Saturday, April 17.

In 2010, he proceeded to Umar Musa Yar’adua University, Katsina, where he studied History. He graduated in 2010. Yazid Surajo, a master’s degree holder, works as a scavenger.

However, while he was in school, Surajo lost his father who was a police inspector in 2010. Life became hard as the family struggled was unable to have access to the deceased’s entitlement.

According to Surajo, it took 10 years before the Police Service Commission finally released to the family, a sum of N3.5 million which was half of the deceased’s entitlement. “We suffered a lot to see that we got that entitlement in time because of the hardship that we fell into. We were duped by some personnel before getting that sum at the end,” Surajo lamented.

Life after school After completing his first degree and the youth service in Osun state, Surajo began to think of the next step for him. Luckily, he was selected among the batch A of N-power beneficiaries under the National Social Investment Programme.

Beneficiaries under the scheme are paid N30,000 per month. After his exit from the programme, Surajo moved to Lagos to look for a job. After applying for many white-collar jobs without getting any, the young graduate decided to venture into the scrap business.

He said: “It is obvious that if you want to achieve something good in life, at least you have to be dedicated and self-determined. When I concluded my national service in 2016, I made a decision not to stay idle. “Many of my childhood friends used to go to Lagos, so I didn’t hesitate to join them. Some said I was not fit for the business because it required energy and it was stressful. Those that knew me well and my attitudes knew that I could withstand all the challenges that I found myself into.” How the scrap business works Surajo said he and others numbering up to 70 work under a master called Dandogo.

Dandogo provides them with money every day to go out and look for scrap to buy. He narrated: “Some may be given N7,000, some N10, 000, some up to N30,000, depending on capacity. After collecting the money, everyone will take his truck and push it around in search for scrap to buy.

“If you come across an item to buy which exceeds your money, you call your master to send you more money, and in the evening, everyone will go back to his master to upload the items he has purchased, measure it and the master will take out his money and give you back your gain. This is how we do the business on a daily basis.”

Back to school for masters In 2018, Surajo was offered admission to study for a Master’s degree in Development Studies at Bayero University, Kano. To pay the acceptance fee, he had to sell his only plot of land. With his commitment, he struggled to complete the programme.

Surajo’s next plans is to modernise the scrap business if gets the required capital. His words: “I will register my company and also register my workers. I will give them enlightenment on what kind of goods they should buy and the source they should trust.

“I will also use this media to call on the youth to be self-reliant with the little they have at their disposal to start a little business. I also advise them to desist from involving themselves in any criminal activities, like internet fraud, armed robbery, kidnapping, and all other criminal activities.” On his Facebook page, Suroja recently posted, with his pictures carrying some scrap and copies of his certificates: “It’s better to die on your feet than to live on your knees. I had rather be dirty and satisfied than be clean and hungry.

Nigerians react to Surajo’s story ;
Princess Geoffrey said: “A country where graduates are suffering while bbnaija housemates are getting rich .. misplaced priorities”
Babasola Tolu Johnson said: “You see? When som ppl say wht is the essence of education? They know what thy are saying because thy are frustrated ….with the situation of the country ..this is an example.”
Olanrewaju Sodiq Atoba said: “Babasola Tolu Johnson It’s just so disheartening to see and hear stuff like this. Education is important. One thing is to have it, the other is to need it” Ahmad Imam said: “We need to bend down and look beyond our degrees and whatever certificates we have. If some of the world’s richest are dropouts, that is to tell us education is not always equal to success.” Abimbola Oyediji said: “Many that should have retired are still occupying posts meant for younger generation. I see many old men and women going to their offices bent and staggering because of old age, some are stroke stricken, yet still go to work just to keep the post from getting to the youth. Failed, old generation. They will be asked a question they will not be able to answer.”

Related Topics:#SosscopeBayero University Kano
Up Next