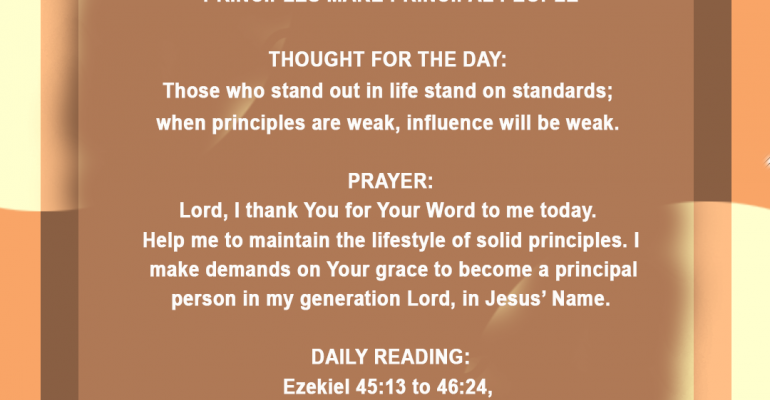 Those who stand out in life stand on standards; when principles are weak, influence will be weak.

SCRIPTURE: But Daniel purposed in his heart that he would not defile himself with the portion of the king’s meat, nor with the wine which he drank: therefore he requested of the prince of the eunuchs that he might not defile himself. Daniel 1:8

THOUGHT FOR THE DAY: Those who stand out in life stand on standards; when principles are weak, influence will be weak.

Principles in this context refer to a set of rules or beliefs governing a person’s behavior. They are fundamental truths or guidelines that regulate one’s behavior or conduct.

Principal people are principled people. It was principle that made Daniel to reject the sumptuous delicacy of the king of Babylon. Daniel also refused to succumb to the king’s decree against praying (Daniel 6:11-12).

Being principled is a fundamental requirement for greatness in life and destiny. However, not many are willing or able to imbibe the discipline of living a principled life. The shortage of principle is the reason for the scarcity of principal people on earth today. The stronger your value the more valuable you will be on earth.

Why is it that no one wants to adhere to the advice of a thief or a harlot? It is because they lack principles. A drunkard for instance, has no voice on earth.

Those who stand out in life stand on standards. When principles are weak, influence will be weak.

Get this: Principled people are always attracted to principled people. Integrity attracts integrity. So, a smoker, or a gossip should not be comfortable around you.  Your rigidity should be an indictment on their carnality; your discipline should rebuke their carelessness.

Beloved, to become a principal person in life, you must be a person of strong principles.

REMEMBER THIS: Those who stand out in life stand on standards; when principles are weak, influence will be weak.

2. Make up your mind to be a person of principle like Daniel.

For Further Understanding, Get This Message: The principles of principled people

PRAYER: Lord, I thank You for Your Word to me today. Help me to maintain the lifestyle of solid principles. I make demands on Your grace to become a principal person in my generation Lord, in Jesus’ Name.

TODAY IN HISTORY: 23/11/ 2004 – The Holy Trinity Cathedral of Tbilisi, the largest religious building in Georgia, was consecrated.

AMAZING FACT: Armenia became the first nation to adopt Christianity as a state religion in the year 301.

DON’T FORGET TO ATTEND: The Sunday Services tomorrow by 6:00am, 8:00am & 10:00am at the Glory Dome. Invite your friends and loved ones. God bless you as you come.

PROPHETIC DECLARATION/WORD: Grace to live by principles is released upon you today in Jesus Name.