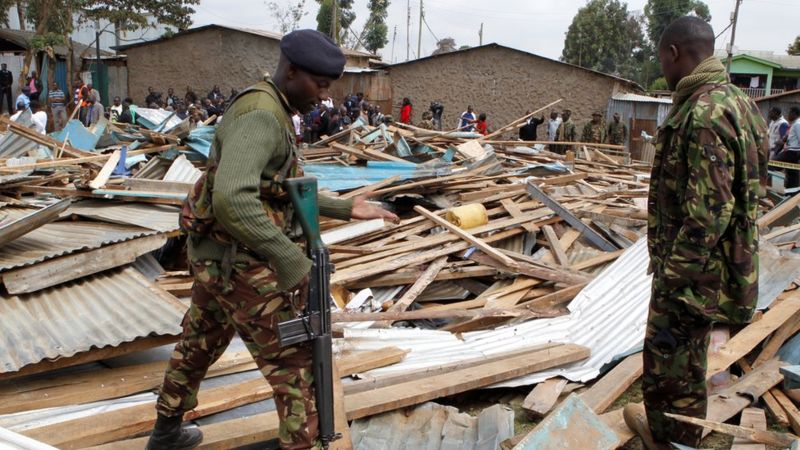 At least seven children have died after a classroom collapsed at a primary school in the Kenyan capital Nairobi.

The wooden structure at Precious Talent Top School collapsed just minutes after the start of the school day on Monday.

Dozens of people were injured and have been taken to hospital in the city. Emergency services are at the scene.

Rescuers have reportedly had difficulty getting to the school because of the large crowds that have gathered nearby.

The school’s director, Moses Ndirangu, blamed the collapse on the construction of a nearby sewer, which he said may have weakened the foundations of the building.

The Kenyan Red Cross transferred some children to the Kenyatta National Hospital. Two of the injured were reported to be in a critical condition.

Local politician John Kiarie the first floor of the building collapsed and trapped the children below.

Angry locals complained about the slow emergency response. The government said it had opened an investigation into the cause of the accident.

The private school is located near Nairobi’s well-known Ngong Racecourse and more than 800 pupils are thought to attend.

Many Kenyans prefer private schools are preferred to state schools, considering them superior but the free primary school education, introduced by the Kenyan government in 2003, has led to overcrowding and it is common to see three pupils sharing a single desk in public schools, while morale among teachers is often poor.

Education minister George Magoha said he was sorry for what happened and promised action after investigations were completed. He also said he took responsibility for what had happened.

But many Kenyans do not want to see someone simply take responsibility; they want resignations, arrests and criminal charges.