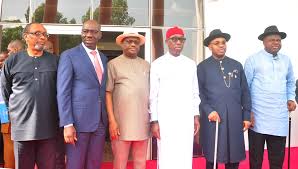 The South-South Governors’ Forum have resolved to form a regional security outfit to check crimes and criminality in their region.

Governor Ifeanyi Okowa of Delta made the announcement to newsmen at the end of their meeting in Government House, Asaba.

Others in attendance were Nyesom Wike of Rivers, Udom Emmanuel of Akwa Ibom, Douye Diri of Bayelsa and Godwin Obaseki of Edo.

Okowa explained that the regional security outfit would help address the numerous security challenges in their respective states.

He said that the forum agreed that the BRACED an acronym for (Bayelsa, Rivers, Akwa Ibom, Cross River, Edo and Delta) Commission would work out the modalities for the security outfit and have agreed to restart the commission with the headquarter in River State.