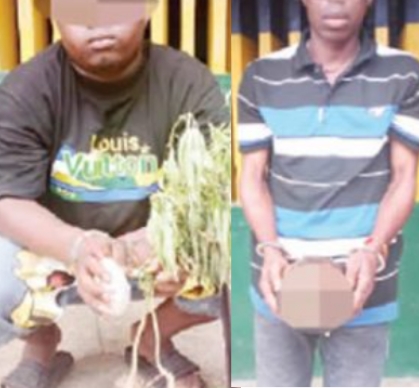 A suspected fraudster and his herbalist known as Ike, aka Ogenesu, have been arrested after policemen attached to the Obiaruku Police Station recovered suspected human parts at the herbalist’s place in Obiaruku, Ukwuani Local Government Area, Delta State, IGBERETV reports.

The suspect was driving around 5.20pm on Friday, October 28, when five policemen who were on a stop-and-search duty flagged down his vehicle.

The suspect refused to park and sped off instead, so the policemen chased after him and finally caught up with him.

The policemen, while searching the vehicle, found a note specifying the need for human parts.

“The instruction on the note was that the man should provide a human head, hand and leg. After recovering the note, the policemen asked what he wanted to use the specified items for and out of fear, he said it was for something,” a source told the publication.

“So, the policemen embarked on full investigation by visiting the Obiaruku Police Station to obtain a warrant to search his three-bedroom flat and while searching his house, they obtained another written note requesting the same items in the first written note that was found in his car.”

The police officers detained the suspect and during interrogation, he mentioned the herbalist Ike.

The suspect led policemen to the herbalist’s place, and while searching the premises, a decomposing corpse was found beside a fish pond.

However, Ike claimed the corpse is that of his child.

He said: “It was my child that was buried; I dug the grave and removed the corpse from where it was buried.”