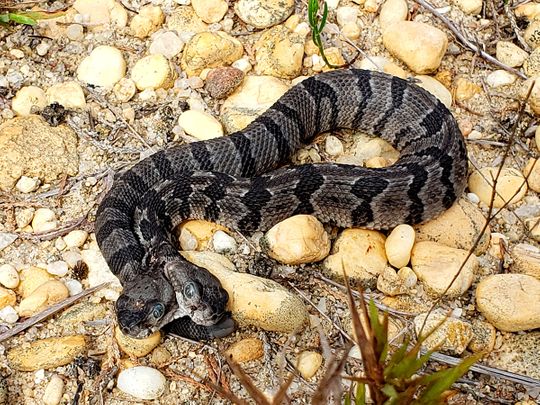 Snake experts in New Jersey said they are caring for an unusual find — a young timber rattlesnake with two heads.

The Herpetological Associates of Burlington County said the snake was dubbed “Double Dave” after being discovered by two employees who are both named Dave.

Zappalorti said the Herpetological Associates group is a consulting firm dedicated to protecting the habitats of snakes and other endangered creatures. He said the group also maintains a collection of endangered snakes, so they are qualified to care for the two-headed serpent.

“It probably was meant to be a twin and it mutated and the female gave birth to this abnormal baby,” he said of Double Dave.

He said Double Dave is the first two-headed timber rattlesnake ever found in New Jersey. He said a similar snake was found in Alabama in 2009.

Related Topics:two headed rattlesnake
Up Next

Countries agrees to protect sharks and rays from extinction