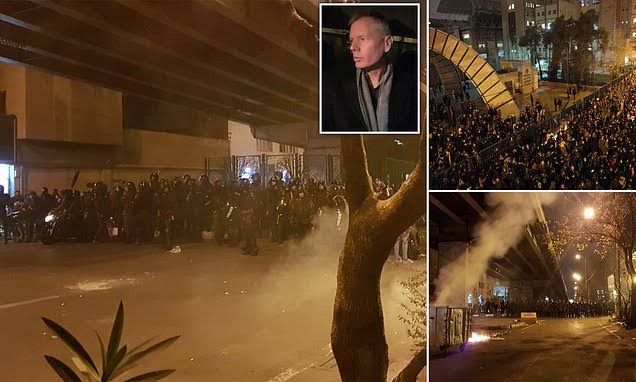 BRITAIN’s ambassador to Iran has been arrested after he was accused of “inciting” angry protests in the country’s capital, Tehran.

Rob Macaire, 53, was in the furious crowds which clashed with cops and was detained after photographing demonstrators.

Foreign Secretary Dominic Raab said the arrest of the ambassador – who was appointed as envoy in March 2018 – is a “flagrant violation of international law”.

Raab added: “The Iranian government is at a cross-roads moment.

“It can continue its march towards pariah status with all the political and economic isolation that entails, or take steps to deescalate tensions and engage in a diplomatic path forwards.”

Mr Macaire was detained for more than an hour before he was released.

The ambassador then denied claims he was involved in any demonstrations.

He tweeted: “Thanks for the many goodwill messages. Can confirm I wasn’t taking part in any demonstrations! Went to an event advertised as a vigil for victims of  #PS752 tragedy.

“Normal to want to pay respects- some of victims were British. I left after 5 mins, when some started chanting.

“Detained half an hour after leaving the area. Arresting diplomats is of course illegal, in all countries.”

Locals had clashed with riot police as they stormed the streets of Tehran chanting “death to liars” and demanding the country’s supreme leader resigns.

The furious crowds’ demands for Ayatollah Seyed Ali Khamenei to step down were sparked after the regime admitted it “unintentionally” shot down a Ukranian passenger plane.