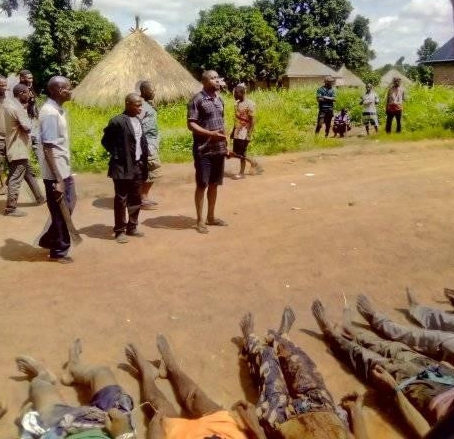 More than 40 people, among them a graduate of the Federal University of Agriculture, Makurdi (FUAM), Benue State, were killed on Sunday while many others were wounded when herdsmen attacked Odugbeho village in Agatu and logo local government areas of the state.

The FUAM graduate was identified as Mr. Echechofu Ali from Odugbeho in Agatu Local Government Area. It was learnt that 30 people were murdered in Agatu while two were killed in Logo.

Hordes of people including women, children and older people displaced as a result of the attack were taking refuge at the neighbouring Ogbaulu community in Agatu Local Government Area.

A an indigene of Odugbeho, Isaac Oche, said the herdsmen of Fulani extraction invaded Odugbeho Market during a wake about 5.45pm on Sunday and started shooting sporadically, killing anyone in sight. According to him, the invaders left about 6.40pm after killing a lot of people. Oche said the herders escaped into the bush but later resurfaced shortly after the first 11 bodies were recovered.

The witness added that he also saw other nine bodies scattered by the roadside but couldn’t evacuate them for fear of the unknown. He said: “We cannot stay any longer to recover all the bodies because it was dark and no security was available. I believe more bodies would be recovered when security agents are around.”

Oche disclosed that the herdsmen, believed to have come from neighbouring Nasarawa State, passed through Gwer West Local Government Area and took the people unawares. Another witness, Iyu Goche, said 10 other bodies were evacuated from the bush, bringing the death toll in Agatu alone as at press time to 30.

The sources said the matter had been reported to the police in the area for necessary action.

State PDP chairman and an indegene of the local government said, “It was on a market day when the people observed that herdsmen had invaded. Imagine the defenceless people on a market day; you can imagine what will happen. “The casualty figure, as I was told by a community leader, is more than 40. But as of this morning (Monday), they had buried 25 bodies and are still searching the bush because many are still missing.

The residents of the community have however taken refuge in other communities and the neighboring local government.

The chairman of the local government and security men are in the bush right now.” The Chairman of Agatu Local Government Area, Hon. Adoyi Suleiman, confirmed the attack and killings. Adoyi, however, said 27 people were killed in Odugbeho community.

The chairman said the people were taken unawares as the attackers invaded when the market and a wake were on. He said: “They came in a guerrilla style, struck and left immediately.” Adoyi, however, said that there was relative calm as at press time due to the presence of security operatives – soldiers, policemen and personnel of the Nigeria Security and Civil Defence Corps (NSCDC).

In a statement, the state Police Public Relations Officer (PPRO), DSP Catherine Anene, confirmed the Agatu killings, but did not give casualty figure.

She said: “Agatu attack is confirmed and the Commissioner of Police has deployed more police officers to manage the incident and forestall further breakdown of law and order.

The number of victims is yet to be ascertained as officers are still engaged in stabilising the area.”