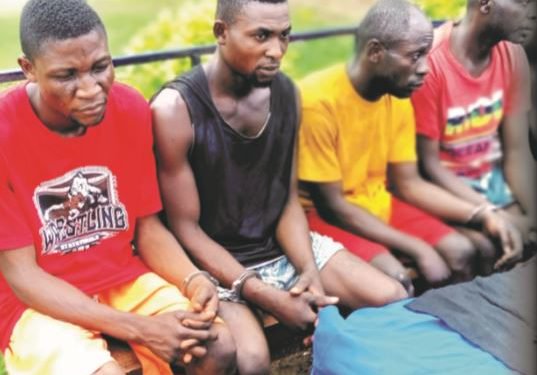 A suspected serial killer in Benue State arrested for killing 16 persons and burying the victims in mass graves has said that he killed his victims for ritual and supernatural powers.

The 30-year-old suspect, Iorwuese  Kpila, made the shocking confession while he was paraded on Friday alongside six other members of his gang by the Benue State Police Commissioner, Mukaddas Garba.

Kpila said he planted cassava on the mass graves as a decoy. The suspects said they lured their victims who are mostly commercial motorcycle operators popularly called okada and killed them.

He said: “We would tell okada riders to drop us at a certain location and immediately we reached there, me and my gang members would grab the victim and strangulate him with a rope. We would dig a grave, bury him and plant cassava on top of the grave, thereafter sell the motorcycle.’’

He claimed that a spirit known as ‘Queen’ told him to kill 18 persons to acquire supernatural powers ’to appear and disappear.’

He disclosed that he had operated for three months only, although some of the bodies exhumed appeared to have been buried for more than a year.

CP Garba urged members of the public to feel free to offer his command genuine information about criminals and their activities in the state.