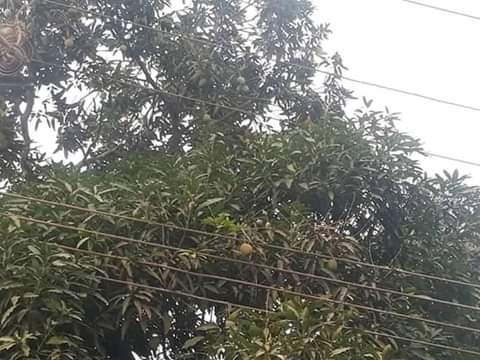 A young wheelbarrow pusher was electrocuted on Wednesday morning while attempting to pluck mangoes from a tree along Enugu Road, in Nsukka Local Government Area of  Enugu State.

It was gathered that the deceased said to be about 18 years old, had climbed up the mango tree and, using a short rod iron, and had mistakenly made contact with a live high tension wire which electrocuted and killed him instantly.

Mr Jude Eze, a resident of the area who said that he did not know the exact time the incident happened, suggested that the man might have climbed the mango tree to pluck mangoes with an iron rod and had made contact with the high tension wire which got him electrocuted.“I just saw his lifeless body with electric burns under the mango tree while I was rushing out for work,” .

A commercial motorcycle operator who pleaded anonymity told Daily Sun that the incident happened around 6:30 am, adding that the rod allegedly used by the dead man to pluck the mango was still trapped on the high tension wire.“I don’t know the man’s name but I knew him as a barrow pusher from Peace Mass Transit Park Nsukka. I was going to drop a passenger at Peace Park in Nsukka when I noticed that something fell from a mango tree opposite zenith Bank Enugu road Nsukka. I moved down to the area after I dropped the passenger only to see people watching his lifeless body helplessly.

By all indications, he probably might have made contact with the naked wire while trying to use the rod to pluck the mango,” the motorcycle operator said.

Policemen who arrived at the scene shortly after the incident, took away and deposited the man’s corpse at Bishop Shanahan Hospital mortuary Nsukka.

Related Topics:Enugu State
Up Next

Woman cuts off his nose, upper teeth, tip of tongue, lower gums, then called his mother to come carry him ( Photo/post)