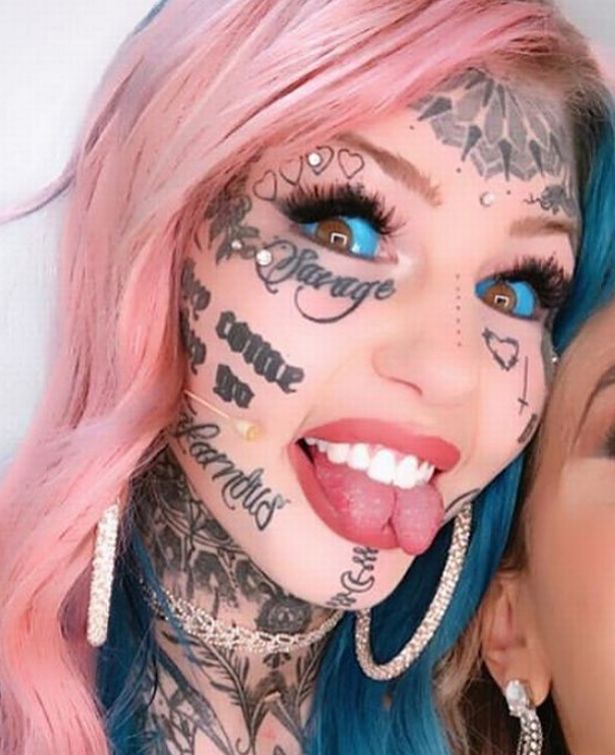 A woman has spent more than £20,000 covering her entire body with tattoos – including turning her eyeballs blue.

Amber Breeana Luke, 24, got her first inking when she was just 16 because she wanted to “know what it feels like”, and she immediately caught the bug.

Her first design was simple old-fashioned calligraphy which read ‘you can keep knocking, but won’t knock me down; no love lost, no love found’.

But now, every inch of her body is covered with stunning designs, including flowers, skulls, animals and block patterns.

Amber, from New South Wales, Australia, said: “At first it was because I wanted to know what the feeling was like – I craved it even though I had no idea what it felt like. Once the needle penetrated my skin, it felt like home.

“My passion developed when I was 20 years old, I started to get more heavily tattooed.

Amber, who works as an apprentice tattooist while studying to become a traffic controller, isn’t exactly sure how many tattoos she has in total, having stopped counting when she reached 150 – but she thinks she’s had at least 100 more since then.

She also her tongue split in two and a silicone implant in her eye to make her look like a pixie.

Perhaps her most shocking tattoo – and Amber’s favourite – is her eyeballs, which she has had coloured in bright blue.

Her love for tattoos coincided with her deciding to get help with her mental health struggles after an extremely difficult few years.

Amber regularly posts photos of her body on social media as she hopes to inspire people to love their body, while promoting a positive example of body modification and heavy tattooing.