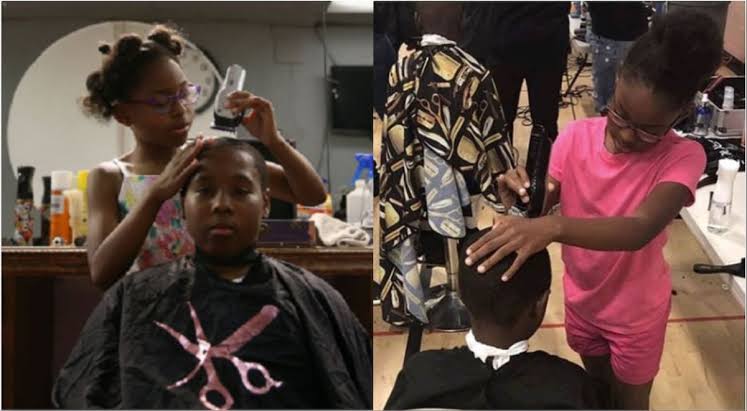 Neijae Graham-Henries found her passion when her brother chose to discontinue the Junior Barber Academy in North Philadelphia in 2018.

Even as a toddler, she believed people can show others something that they’re capable of doing the extraordinary.

Before she was due to start her second grade, Graham-Henries had become a certified barber. Soon after her training, she started volunteering works to cut students’ hair for free at a back-to-school event.

The 8-year-old spends her time going to school and giving free haircuts to those in need and at the same time mastering her skills from Philadelphia barbers.

Describing her technique, Graham-Henries said: ”The whole process is to finish it and do it really good and to, like, style it good.”

Graham-Henries received national attention from outlets like BuzzFeed and Inside Edition when footage of her working went viral on social media. She also got invited to speak at the Essence Beauty Carnival in New York City.

At this young age, Graham-Henries is confident about her career in a male-dominated profession and her resolve to pursue her passion has won her the World Record Academy title of ”World’s Youngest Barber”.

Even though Graham-Henries has styled a few women, she enjoys cutting men’s hair. ”They have a better texture,” she said, adding, ”no offense.” Until she’s 16 before she can secure a barber’s license in Pennsylvania, Graham-Henries must provide free haircuts under the watchful eye of a licensed barber.

The youngster doesn’t just enjoy cutting hair, she said she enjoys sleeping, eating, dancing, and playing video games like Minecraft. She is a kid with big dreams. She is also envisaging a career in sewing as she pursues her barber’s license when she’s old enough. Her dream is to have Kevin Hart or LeBron James as clients in the future.

Traditional ruler goes into coma after attack by hoodlums