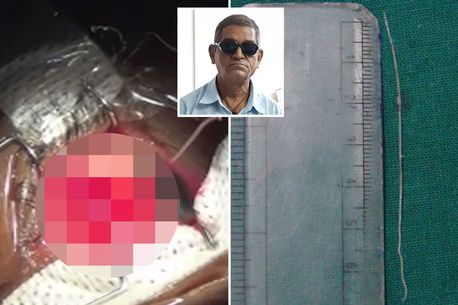 Doctors have removed a 7cm-long wriggling worm from a man’s eye after he complains of it paining and itching him for the last few years.

Jasubhai Patel, 70, from Gujarat, India, desperately sought help from several doctors but couldn’t be diagnosed with any illness.

Dr Milan Panchal, an ophthalmologist at Narayan Hospital and Research Centre in Bharuch, carried out a microscopic investigation on the man and found the parasite squirming in the back of the conjunctival surface – the white skin portion in the eye.

The doctor warned that the worm had the potential to permanently damage the man’s eyesight if it was not removed immediately.

He added: “If the worm was not removed on time, it could have blinded the man.

“There is also a chance that the worm could have gone to his brain through bloodstream.

“A surgery would have needed to remove it from the brain.

‘It took us 25 minutes to remove the parasite. It was difficult to pin it down as it was moving around,” Dr Milan said.

Patel, who is unmarried, was living in a hospice where he worked in the kitchen, cutting vegetables.

Doctors suspect the worm in Patel’s eye could have entered through a dog bite.