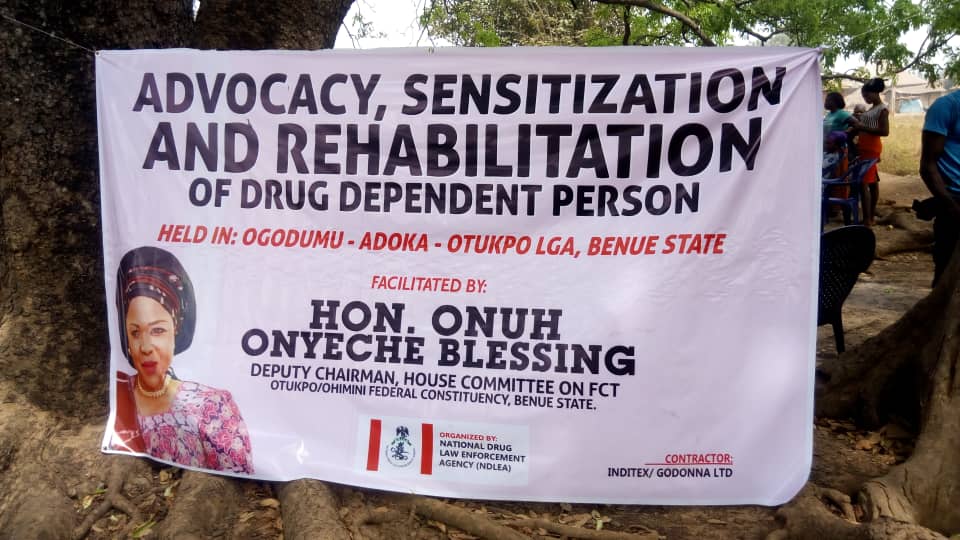 Youths have been charged to avoid hard drugs and narcotics due to it’s adverse effects on their health and the impediments it poses to their overall growth and development.

The charge was given by two medical experts, Pharmacist Apeh Inalegwu and Doctor Ndubuisi Nwankwere at Ogodumu, Otukpo local government area of Benue State, during an advocacy, sensitization and rehabilitation exercise on Drug Dependent Persons.

The programme, which was facilitated by the member representing Otukpo/Ohimini Constituency in the Federal House of Representatives, Lady Blessing Onuh, also had officials of the National Drug Law Enforcement Agency in attendance.

In separate lectures Pharm Inalegwu and Dr. Nwankwere spoke on drug abuse and its effects with Inalegwu pointing out that peer pressure could make a young man get himself involved in the abuse of drugs which is very dangerous to health because it could damage the liver and also affect the functions of the lungs just as the heart.

According to Dr. Ndubuisi Nwankwere, excess intake of cannabis can block the lungs thus resulting in difficulty in breathing.

He further frowned at youth’s penchant for Tramadol, saying its abuse has adverse direct effects on the brain while it is difficult to control when addiction sets in.

The Deputy Superintendent of Narcotics, NDLEA, Benue State Command, Mrs. Negedu, also spoke about rehabilitation for those who are ready and willing to give up cannabis and hard drugs.

Reacting, Mr. Matthew David, who spoke on behalf of the youths thanked the facilitator and resource persons of the programme for their efforts saying one special thing they have learnt is that somebody can summit his or her self to the NDLEA for rehabilitation without being arrested.

Representative of the community’s  Chief, Elder Benedict Ekoja, prayed for God’s favour on Lady Blessing Onuh so that she can continue to bless the constituency.