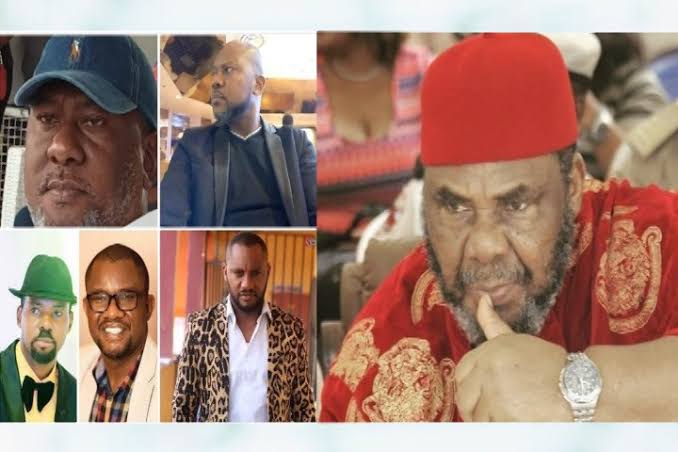 Son of renowned Nollywood date Pete Edochie and also Popular Nollywood actor, Yul Edochie, has taken to social media to reveal that he has finally reunited with his brothers.

Taking to his official Instagram page, the movie star posted a video of himself with four of his brothers having a good time. In the short clip, Yul was seen with all of his father’s sons.

In the caption of the post, the Nollywood actor noted that it was the first time in years that he and his brothers were gathered together.

He wrote: “With my four brothers. The last time we came together like this was a long time ago.”

Internet users react to video of Yul with his brothers after Yul posted the video online.

Some of them noted that they all gathered because of Yul’s second marriage to Nollywood actress, Judy Austin.

Read the reactions: This_girl_called_sally: “At least the marriage saga brought them all together in one place after a long time. At least it did something good .”

Ifunanya_official: “This is not just a video. This is to tell those of you crying over judy that his family are not upset over his new marriage. So you guys should go and face your own shaking homes.”

Figure8_55: “The first son is your dad’s perfect picture.” Vanessa_mbombo: “The first born is his father twin .”

Jael_x_cultures_: “You are the last baby bro the very stubborn one‍♀️ beautiful family .”

_Ladypoet2000: “So he’s the youngest but he decided to try polygamy with his full chest. Na wa o.”

Fabulosgloria: “His actions definitely rocked the family so much it necessitated a meeting of Umunna. .”

Avalonokpe: “No be Okey Bakassi be dat?” Nice one.

I Had To ‘Pay The Whole Airport’ To Leave Nigeria – American Rapper, DaBaby