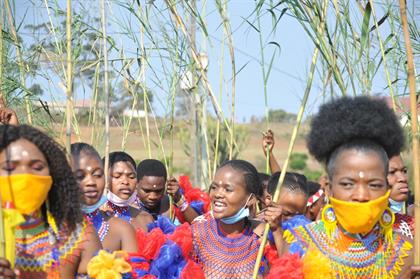 The annual traditional Zulu Reed Dance has taken place virtually for the second time in a row as a result of COVID-19 in South Africa.

Only 37 maidens were invited to participate in a scaled-down ceremony (to commemorate 37 years of the festival) at the Zulu monarch’s royal palace in northern KwaZulu-Natal, on Saturday.

The new Zulu monarch, King Misuzulu KaZwelithini, is commemorating the role that his parents have played in upholding the traditional Reed Dance. Both his parents died of Covid related illnesses earlier in 2021.

The Royal Reed Dance is an annual event which aims to celebrate and unify the Zulu nation as well as honouring the nation’s virgin maidens.

In light of the HIV/AIDS pandemic, this cultural practise hopes to curb this epidemic by promoting a culture of respect for young women who, vow to remain virgins until marriage.